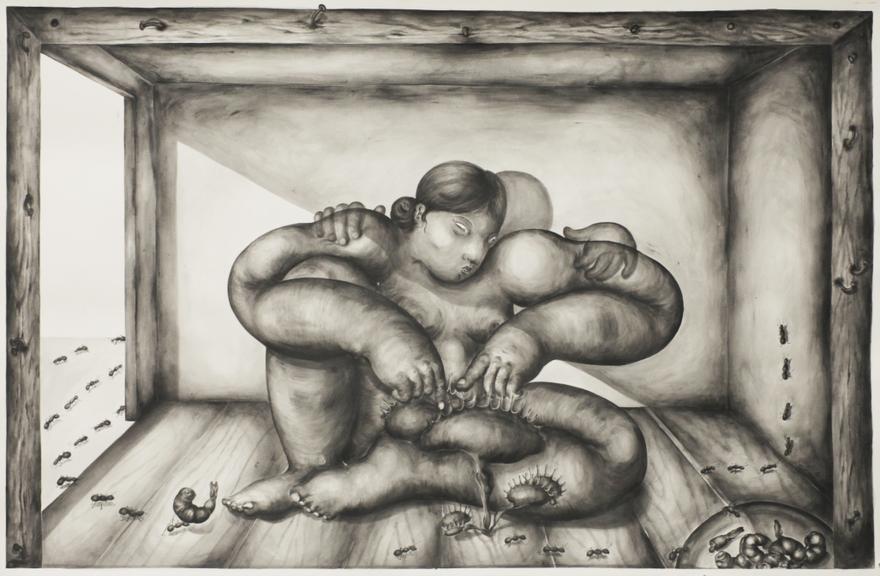 Kapp Kapp, New York is pleased to announce its debut exhibition of Lily Wong (b. 1989). Built for Love will mark Wong’s first solo exhibition in New York and will feature a body of new works on paper and panel.

The focus of Wong’s work, which is steeped with elements of East Asian image making, has undergone a slight formal shift for this new series. Though in philosophical continuity with her previous work, Wong’s new body concentrates on single narrative paintings, which both joyfully and hauntingly study our everyday dualities.

Wong, who considers these works more cerebral than her former multi-narrative Sumi Ink on paper scenes, is fascinated by the intersections of temptation and tenderness, loss and love, and impulse and curiosity. In Spider, 2019, an acrylic on paper painting, Wong’s figure gluttonously inhales a freshly cut flower. With fleshly rendered shears and a fork in the foreground, Wong creates a chillingly animalistic portrait. The title of the piece, which upon closer inspection comes from the spider web behind the figure, implies a particularly grim undertone. Wong’s enunciated emotion seeks to underscore the pain of loving something too hard.

The artist’s recent work emphasizes the scale of her figures, relying on the body as the defining condition. Each figure serves both as a proxy for Wong herself and as an imagined translation of personal fears and anxieties. Each piece, as Wong puts it, is a “search for security” an attempt to grapple with the world’s volatilities.

Tender Temptation, 2020, observes one of Wong’s signature unclothed figures under a table or in a crawl space, perfectly framing the page. The figure, who is being caressed by their own shadow, playfully dips her fingers into the mouth of a Venus Fly Trap, reminiscent of Disney’s Aurora pricking the spindle. The floor beneath her is crowded with ants, walking away carrying the shrimp from the figure’s plate. Though lightheartedly mysterious in its appearance, Tender Temptation reflects upon anxieties of loss and notions of temptation and curiosity.

Wong’s narratives intimately consider and reconsider these ideologies. The emotion evoked by the artist’s figures optimistically define the everyday anxieties of love, loss, joy, and impulse.

Built for Love will be on view at Kapp Kapp, New York through May 24.