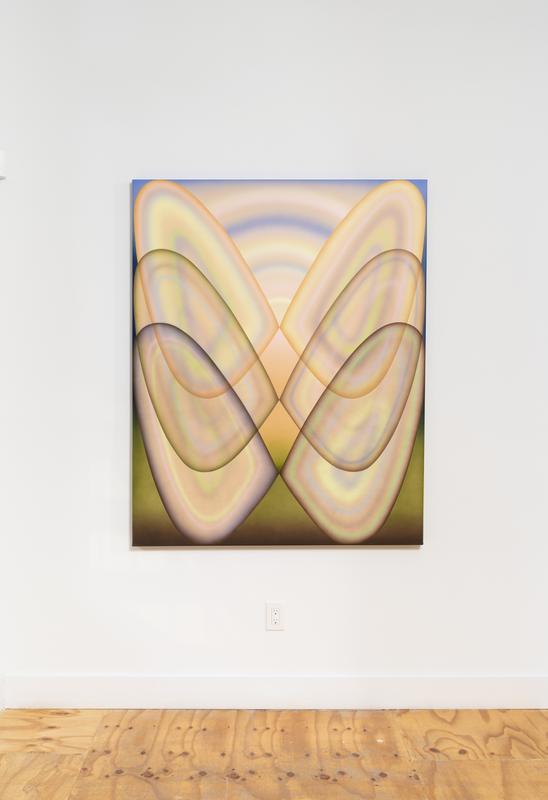 Kapp Kapp is pleased to present Omens, Molly Greene’s third solo exhibition with Kapp Kapp and her second solo exhibition in New York. In 2022 Greene took an opportunity to pause before considering a new body of work, creating space to approach the living anew, something foundationally vital to Greene’s making. Omens is an exploration of integrity, both bodily and metaphysically. As external contours inadvertently and intentionally collide, both separate forces are changed as they adapt, distort, and meld into or away from one another.

Recurring for Greene through this process was a contemplation of interference. This began as consideration of electromagnetic and radio waves and the continuing interferences, which alter and diverge their totalities. To Greene, this is a generative process for which the logic extends to considering the body, and effectively the living. As forms are intruding into each other to create entirely new forms, nesting within other forms, or diluting themselves entirely, Greene’s body of 10 new major paintings configures her forms entirely as amalgamations of interference.

Greene’s Ghost, 2022, for example, among the earliest works from this body, splays three articulated wave forms overlapping and intersecting across the canvas, the space between which becomes growingly deceptive. Liminally converging, Greene’s waves are both connected and entirely separate, parting at their convexes and connecting at their concaves, at once three forms moving connectedly and disparately as one structure. The waves which are rendered in an opaque green melt into translucence at their crooks, revealing both the wave behind and within itself, a further question of its constitution.

For Greene, these interferences call to question the coherence of one’s body; what is bodily integrity if the body is an infinitely evolving composite? Ironically, as much of the world looks to the metaverse and encryption for answers in response to questions of integrity, Greene is most intrigued by fungible forms, forms, as Greene puts it, which open the body to traffic between other forms of life.

As this body of paintings expanded, Greene became connected to the word omen as a reconciliation of this effect. At its barest, an omen is a portent of good or bad to come- an attempt to relate to the future. To look for or see an omen is, as Greene puts it, an awareness of being subject to an uncontrollable outcome, an interference perhaps. An omen is to recognize ones vulnerability.

Omens will be on view at Kapp Kapp through October 22.