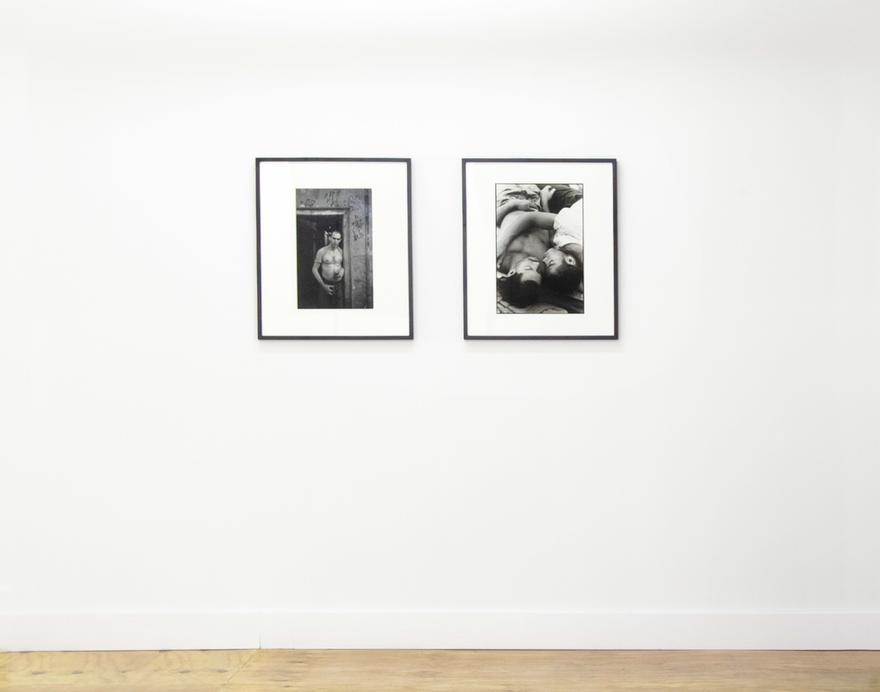 Kapp Kapp is pleased to present Stanley Stellar: The Piers, the first survey of Stellar’s photographs documenting the Christopher Street piers from the 1970s and 1980s and the inaugural exhibition at Kapp Kapp’s new gallery space at 86 Walker Street in TriBeCa. Marking Stellar’s third solo exhibition with Kapp Kapp, this body of work examines the brief freedom of The Piers in a New York City that restricted queer life to the cover of night; The Piers, as Stellar witnessed, birthed a gathering place for sunbathing, sex, community, and art.

As Stellar puts it, “I wanted to be part of this new freedom. And with that freedom came this place behind a fence. There was a wooden fence placed in front of the perimeter of all the abandoned piers. And, as the cars went by on the West Side Highway, they didn't know we were there. They didn't know anybody was on the other side of the wooden fence.” The Piers, as they were known, were a series of abandoned shipping piers, which, in a pre-AIDs New York, were both a playground and gathering space for the queer community to exist freely in daylight, away from public scrutiny.

Stellar’s history of documenting New York’s queer community is unrivaled. Stellar, who has lived in the same TriBeCa loft on N. Moore Street since the 1970s, has witnessed the queer community around him survive decades of persecutions and triumphs alike, one quality remaining the same, an unwavering dedication to connection, capturing the optimism and tenderness of his friends and those around him.

For The Piers, Stellar presents a suite of previously unseen vintage photographs and five contemporary prints, revisited especially for the occasion of the exhibition. Approaching each subject with his infectious humanism, Stellar’s lens finds many intimate moments among the sprawling landscape. Take Embrace, an image from 1986, shortly after the piers were demolished, which finds a couple sleeping and unbothered along the perimeter of one of the piers, in a deep embrace. Nodding to these special moments of connection, Stellar observes this separate peace and quietude, a place of refuge where queer folks could relax in freedom.

Conversely, the interior of the piers, as reflected by Stellar, was a place for play and exploration, both sexually and configurationally. A labyrinth of former offices to roam, there were often anonymous sexual encounters or run-ins with friends and acquaintances among the many murals and graffiti alike on the decaying walls. Peter at the Door from 1981, for example, pictures Peter Hujar, a peer of Stellar’s, within a doorway leading to an empty room. Standing just below a small-scale series of Keith Haring’s signature figures, Hujar, with his hand reaching into his pants, stares longingly into Stellar’s lens, a quiet moment of connection.

The Piers were demolished beginning in the mid-1980s, coinciding with the growing numbers of the AIDS epidemic. Stellar’s photographs document a time of peace and play, a ‘Secret Garden’ of the 1970s and ‘80s before New York’s gay landscape was intensely changed.

Stanley Stellar: The Piers opens at Kapp Kapp on January 15, at 86 Walker St, just blocks from where The Piers once stood. The exhibition will run through February 19, 2022 with a new monograph to be published in conjunction.

Stanley Stellar (b. 1945, Brooklyn, NY) lives and works in New York, NY. Stellar’s work was recently included in Art After Stonewall 1969 – 1989, Grey Art Gallery, New York University NY and From the Margins: Queerness, Identity and Representation, Corcoran Art Gallery, Washington, D.C. In 2011, Stanley Stellar: A Photographer was presented at the Leslie-Lohman Museum of Art, New York. Stellar’s work is included in the permanent collections of The Museum of Modern Art, New York; The Philadelphia Museum of Art, Philadelphia; and The Yale University Art Gallery, Yale University, New Haven, among others.