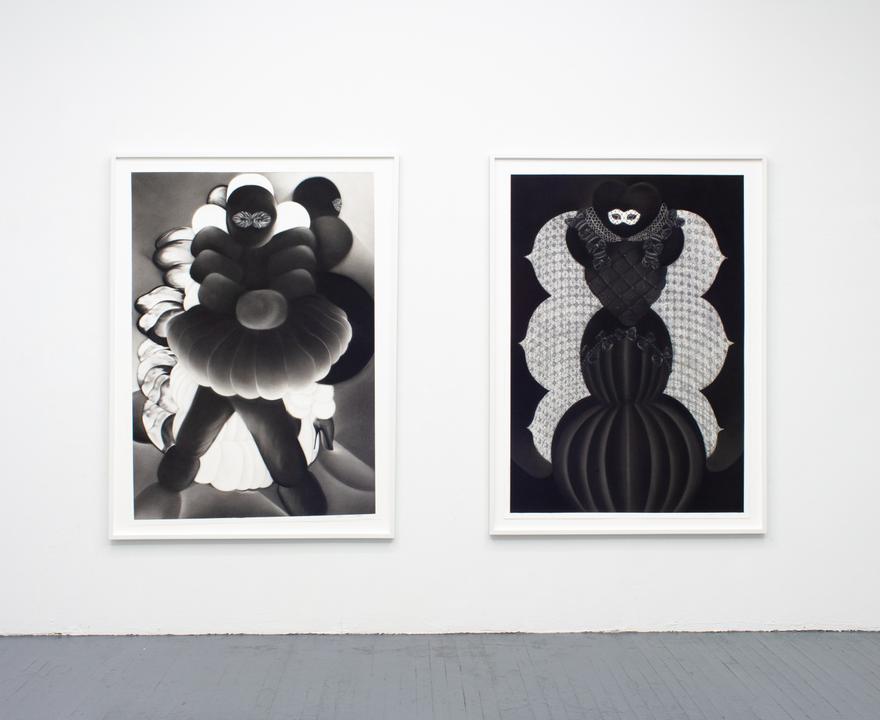 Kapp Kapp, New York is pleased to present Velvet Other World: How Long Shall I Have to Wait, a collaboration between Josh Allen (b. 1995, Andover, MA) and Katrina Pisetti (b.1996, Austin, TX). This marks Velvet Other World’s debut exhibition with Kapp Kapp and their first solo exhibition. VOW’s recent body of work continues their study and manipulation of the body through a focus on costume and form. Seeking to transfigure their ghostly, charcoal silhouettes through material ornament, VOW reconsiders the human relationship with the body and dissects the constructive and protective nature of dress.

Costume, as VOW sees it, can serve both to armor and obscure the body, a tension which aptly defines the paradox of their practice. Translating their invented bodies through material, VOW both highlights and abstracts their figures like costume itself. Take Royal Court In the Love Light, 2021, the largest of the ten works on paper in the exhibition, which frames a feminine form in motion. Engulfed in billows of what appears to be the fabric of a gown, the figure’s body becomes weaved into a cloud of Giacomo Balla-esque movement, fixed in its place only by the vividly rendered eyes and suggestion of a torso and legs. To its right, a second figure appears to emerge from the cloud of movement, recognized only by the attentively flirtatious stiletto, which could as easily indicate a pirouette. At once, VOW’s figure stands both at the fore and is camouflaged into the blacks and greys of their charcoal. Engaging the charcoal to situate their figures within an absence of both time and context, VOW effectively presents the body as an object to be studied, while still imbued with agency.

Each charcoal on paper piece is created through a build up and break down of surface; working with heavyweight paper, VOW constructs layers of charcoal before sanding and erasing, only to recoat with additional layers of charcoal, a process which parallels that of creating fabrics and textiles. VOW’s system of growth and regrowth is as much a reflection of their manipulation of the body as their resulting compositions; VOW’s ghostly figures serve not as facsimiles, but of fingerprints of the artists’ focus to ‘encase’ and ‘transfigure’ the body through material, as they put it.

Looking to the history of theater and pageantry, VOW finds insight in costume’s relationship to identity, utilizing its ability to transform and preserve the body. As in their 2021, Her Majesty is Presented, in which an imposingly regal figure stands cloaked in an exaggerated gown. The figure, who the piece’s title suggests is of royal association, sits either upon a throne or shrouded by a cape or pair of wings. With a halo-like form above their obscured face, the figure transcends to a near-devotional stature. Commanding their viewer’s eye with an opulent costumery and a sanct vitality, VOW ushers an invincibility and immortality as vivid as dress itself.

How Long Shall I Have to Wait will be on view at Kapp Kapp, New York through October 24.

Josh Allen (b. 1995, Andover, MA) and Katrina Pisetti (b. 1996, Austin, TX) live and work in Providence, Rhode Island. Allen received his BFA in Illustration and Printmaking, Pisetti in Printmaking, both from the Rhode Island School of Design, where the two met. Allen and Pisetti began their collaboration under the moniker Velvet Other World in 2021